In the morning, we ate breakfast at Crockett Breakfast Camp before heading to Clingmans Dome. It took about an hour to get there as we had to drive up the mountain which is 6,664′ above sea level. As we climbed the mountain, we noticed fog that became thicker and thicker. This is not what we wanted to see, as Clingmans Dome is known for having spectacular views from the peak. When we got out of our car, we noticed that 80 degree weather had become a nippy 65ish with strong wind. I think the expression on Lauren’s face in the video below speaks for itself in regards to the weather.

That video was accidentally recorded, by the way.

We hiked up the very steep 1/2 mile trail. The park ranger told us it takes about 30 minutes to get there but we made it in 15 cause we’re no pansies! Our muscles ached from our previous day’s expedition at Abram’s Falls, but we soldiered on. We made it to the top and saw a glorious view of fog, fog, and a little more fog. Oh wait, is that something in the distance? Nope, just fog. We waited it out at the top of the dome for about 15 minutes in the freezing drizzle and zipping winds before Lauren had enough and was about to jump from the peak of the dome if we didn’t head back soon. As tough as Myles wanted to seem in the weather, he was secretly ready to head back down too.

As soon as we made it to the parking lot, the fog lifted and we could see for miles into the valley. Of course. We coped with this knowledge by deciding it must still be foggy at the top. We hopped in the car and headed to our next destination, Sliding Rock in Pisgah National Forest. 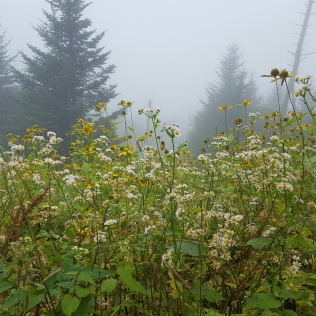 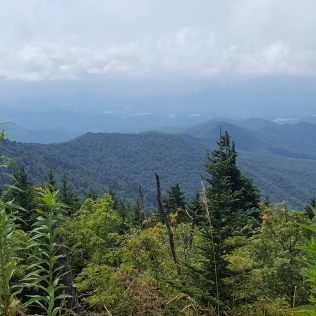 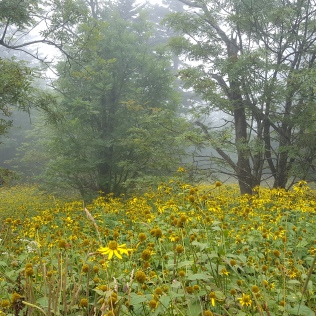 When we arrived at Sliding Rock in western North Carolina, we made some sandwiches for lunch and got ready for the plunge. Sliding Rock is a natural slide-type waterfall that is about 60 feet long. It is fed by an icy cold river, demonstrated to us by the small boy shivering uncontrollably while waiting in line in front of us. After seeing this, Lauren wasn’t so keen on getting cold for a second time in the same day. Myles pointed out that it was her idea to make this stop and that there was no turning back. We slid down the rock a couple times into the arctic pool at the bottom. It was very fun and didn’t seem quite as cold as the blue-lipped boy had led us to believe. Although, he did have less blubber than us, so maybe that was it. After having our fun, we headed on to Columbia, South Carolina, and grabbed a hotel room for the night. On the way out, we noticed many ambulances and patrol cars at one of the stops in Pisgah National Forest. We read on the local news that a man had climbed one of the falls, fallen off, and died. 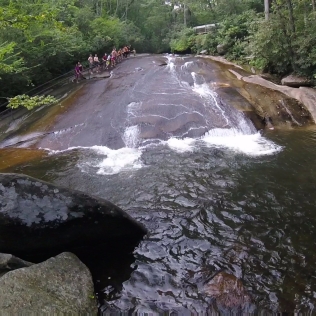