In the morning, it was extremely cold and windy. We packed up quickly, and drove to Craters of the Moon National Monument. It was a very interesting landscape to say the least. There were old cinder cones, lava flows, and lave tubes. We only did two short trails because of the weather. We did decide to climb to the top of the Inferno Cone which is one of the world’s largest basaltic cinder cones. When we arrived, we watched a family of 5 try to climb to the top. It was way too windy for the youngest children. They looked like they might fly away. Three turned back not even half way up the cinder cone. We set off, and were surprised the children made it as far as they did. At the top, our view was mostly obscured by the clouds and rain. We ran back down the cinder cone to our car where we struggled to regain our breath due to the high elevation and wind. After driving the rest of the way through the park, we decided to drive on to Portland, Oregon where we stayed the night in a hotel. 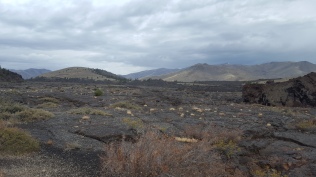 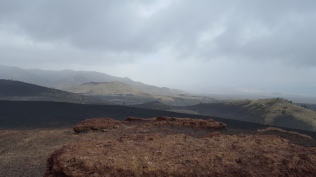 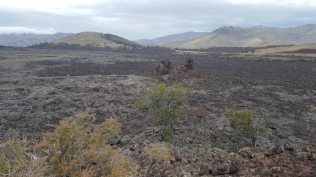 The next day, we went downtown to Powell’s Books. Powell’s is a very large bookstore with new and used books. You know its going to be good when they have to hand out maps of their store. We were there about two hours which isn’t long at all considering the size of the store. There were so many books it was overwhelming – we felt like we hardly looked at any.

We grabbed some food on the way out of town and drove to Waldport KOA. We were fortunate to get a campsite surrounded by bushes which protected us from the wind. This campsite was right on the beach which was really cool, but it was so windy, cold, and rainy that we did not really get to enjoy the view. We slept in the back of the car that night.